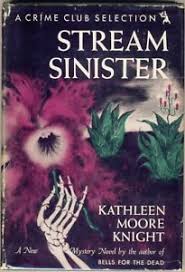 Synopsis: Lieutenant Gavin Scott and Chris de Curiel are in the Normandy invasion, and Chris is killed. Gavin had promised to visit his family in Mexico, and sets out on leave for there. Word reaches the de Curiel family of his death just prior to Gavin's arrival.

Upon arrival, Gavin finds many strange happenings. There are incidents which suggest Chris has returned and leaves messages for Fernande. A headless horseman, Sin Cabeza of legend, appears and Fernando dies from the shock. The headless man continues to haunt the area.

Additional deaths follow, and Gavin realizes the heirs of Fernando are being eliminated one by one ... the inheritance motive becomes obvious. But who is it?

One aspect I liked at the beginning was a dinner where all characters were present and introduce themselves (and to the reader as well).

The multitude of names is confusing, many characters are referred to by more than one; which I have tried to list out above. Note that "Don" and "Doña" are honorary titles (like Mr. and Mrs.) and should not be confused with actual names.

There are some puzzlers. Fernando (Chris' father), "died a long time ago" (p. 10), yet Chris' great-grandfather Fernando is still around at age 102 and shows up for dinner (p.22). Chris and Fernande are described as identical twins (p. 13), yet cannot be (identical twins must be of the same sex, brother/sister twins can only be fraternal twins).

When the action turns from a mysterious disappearing figure in black to exploring a cave, it begins to read like The Hardy Boys.

The book brings in a couple of themes you will recognize from elsewhere. The mysterious black orchids which are found deep in the forest is a regular plot element of the Brenda Starr comics (which began in 1940). And of course the Headless Horseman is a fictional character from the 1820 short story "The Legend of Sleepy Hollow" by Washington Irving.

Overall, once again Kathleen Moore Knight does a bang-up job of placing the reading in rural Mexico.