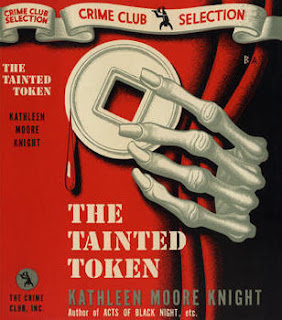 Janet Drake is visiting her uncle, Gordon Firth, at this elegant home in Panama, with her newlywed husband Harvey Drake. They had married on a whim, and with a string attached: Harvey was to work for Gordon as the Traffic Manager for his Gordon Steamship Line. This was a position desired by Neal Gregory, who had also wanted Janet.

Janet's marriage is on the rocks already. Harvey goes out, Janet goes downstairs to discover the body of Gordon, and what she thinks is another injured man who disappears. House guest Elisha Macomber finds an odd coin, the "token". Elisha approaches the local authorities and manages to get their consent to investigate.

Janet gets a message to come see injured "Old George" Stryker, the lottery ticket seller. She finds him - dead. It is discovered that Gordon Firth held the week's winning lottery ticket, drawn just before his death. Now lots of people have motive to do away with him and get the ticket.

Review: So far I have read perhaps half of Kathleen Moore Knight's books, and two of her recurring themes are: Elisha Macomber on Penberthy Island, and exotic Central/South American locations. When I saw this was a "hybrid" with Yankee Elisha vacationing in Panama, I wasn't too optimistic (expecting A Connecticut Yankee in King Arthur's Court); but it worked well. Macomber does a little social engineering and impresses the local authorities enough to leave him alone.

Knight's rendering of the tropical scene is fascinating, with a love story superimposed; reminiscent of Mignon Eberhart's mysteries (another of my favorite writers). They do warm up the reading experience here in a cold, dark Maine winter.

Note: There is one instance of the "n-word" in conversation.
There is a sequel to this book, see Death Came Dancing (1940).