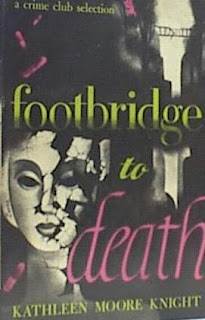 Locale: Penberthy Island, off the coast of Massachusetts

Synopsis: Martin Davenant has just returned to his wife Virginia from the war. They live in their clifftop home on Penberthy Island, next door to his parents. The two houses are separated by a rocky gorge, over which there is a footbridge.

While he was deployed, Virginia had been friendly - a little too friendly - with John Graham. Martin and Virginia's marriage has been strained, due to her family's wealth and his absence. Martin has lost a considerable amount of the family assets on speculations, and has been dependent on Virginia's money. Graham tells her if she and Martin do patch things up, he will bow out of the picture; but if they split, he wants to marry her.

Meanwhile selectman/investigator Elisha Macomber gets a phone tip to keep an eye on Frenchwoman Mme. Marise Caron, who is heading for the island.

A welcome-home gathering is held for Martin, but it is awkward - with his wife Virginia, John Graham (Virginia's boyfriend), and Fay Dryden (Martin's stood-up fiancée) all present. It becomes even more awkward when mysterious, elegant Mme. Marise Caron shows up unexpectedly and greets Martin like a lover - turns out he had met her in France.

Virginia's sleeping pills go missing. Her maid, Dora Ferguson, has taken them and takes one - and it contains poison. She is saved by Dr. Worthington Brown. Virginia and John take a walk on the beach to discuss it, and stumble across the body of Mme. Caron. Another murder will follow, and all evidence points to a conspiracy by Virginia and John.

Review: One thing I enjoy about Knight's books is that as soon as a new character pops in, she explains their relationship to everyone else. And this book opens with a party-full of characters. This story would have benefitted from a sketch map of the homes, footbridge, and road - their description in text doesn't lend to a good visualization.

The story moves right along and we follow Virginia as the circumstantial evidence piles up against her. Empathy for her is a bit of a struggle, she loves John but she is still married to Martin who has been off in the war all this time; even though he turns out be quite a cad. The Elisha Macomber stories never fail to disappoint.