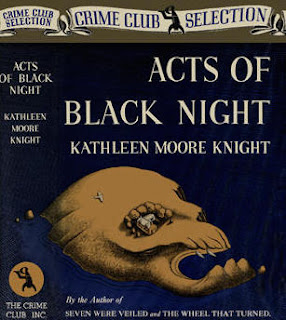 The Parnassus Pictures crew:
Aboard The Amnestra:

Wealthy Frederick Stowe pilots his plane to isolated Stowaway Island off the New England coast, where he has his summer home; inhabited only by caretaker Laban Beardsley.  He lands to find three people from his company, Parnassus Pictures, on the island to begin filming a feature: Llewellyn Sondor, director; Andrea Carstairs, actress; and Fergus Macrae, pilot. Stowe has been hoping for a relationship with Carstairs, which led to his purchasing the company. He finds that Sondor and Carstairs are now married, in a rage, orders them off the island.

Meanwhile, Stowe's ex-wife, Patricia, is aboard The Amnestra on a cruise nearby. A storm comes up and The Amnestra is shipwrecked on the island. The passengers come ashore to Patricia's former home, Stowaway House. While waiting for the storm to abate, Patricia discovers the murdered body of her ex-husband.

Selectmen-Detective Elisha Macomber arrives from the mainland to investigate. Suspicion falls on each member of the boat's party in turn. Meanwhile, there is evidence that someone else is on the island as well. It then is found that their son, Michael Stowe, is being held by kidnappers - and that the purpose of Frederick's visit to the island was to pay the ransom.

Elisha Macomber, her series selectmen-detective, is such an enjoyable non-nonsense person. Speaking as a New Englander myself, he is a fully developed character with none of the stereotypical down-easter about him. He speech is rendered slightly phonetically - usually an annoyance - but the gentle treatment fits right in.

I had wound up in a perfect situation to enjoy this novel - a dark, windy, rainy night in a Maine campground; curled up in bed with the book as the rain beat on the roof of the camper.

The plot moves along in the expected direction with the narrowing down of the possible suspects. Then when the kidnapping subplot is revealed, the story turns in an entirely new direction. Macomber finds the culprit by a careful observation - which I missed in the reading. I thought "Did that really happen?" and then a careful look back showed the event was indeed fairly presented to the reader.

One note for modern readers: one key element is the repeated sound of a lawn mower. It should be understood this refers to an old style manual non-powered reel mower, which makes a distinctive whirring sound whenever it is moved. It does not refer to a gasoline-powered mower with which we are more familiar.