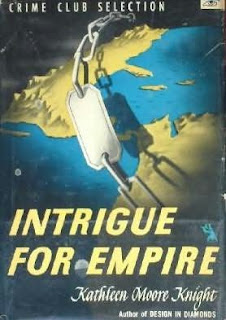 fantasticfiction.com
Major characters:
Locale: Morocco, Cuba
Synopsis: It is 1944-1945? and Pat Torreon, a Mexican, has just been liberated from one of Franco's concentration camps in Morocco. He is waiting for transport back, but all air travel is reserved for necessary travel; and Torreon - being a liberated prisoner - has no passport. He encounters Judith Trowbridge, an American correspondent. While having dinner at a cafe, another customer - Judith's co-worker, Brad Maury, falls dead - poisoned. Pat examines the body and lifts his passport, along with an identification bracelet.
Maury had arranged transport for Judith and himself to the US via Cuba. Pat decides to stand in as Maury and take his place on the plane. He finds Maury's bracelet has the name of a historical Spanish figure. A gunman, Señor Ibarra, enters Pat's room, demanding Maury's papers. Pat shoots him in the scuffle. He finds this Ibarra is wearing a simliar bracelet. Pat and Judith get on the plane and go to Cuba.
In Cuba, Judith looks up a newspaper friend, Stanley Pierce, who suggests the men are part of an Axis plot, named Hispaniadad, to take control of countries in Central and South America; and the bracelets are a token to identify each other.
Review: A love-struck couple is stuck in Morocco toward the end of WW II, trying to find passage to the Americas. Sound familiar? It should - being the same setup as 1942's Casablanca. Perhaps this 1944 novel was inspired by Casablanca, as was a number of spin-off films of the time. The difference? This time, the guy and girl both make the plane.
This is the first spy novel by K.M.K. I have read (not sure if there are others) and it is a far cry from quiet little Pemberthy Island. The plot is exciting, the characters well developed.  Mixed feelings about protagonist Pat Torreon - a good guy, but a bit quick on the trigger. Judith is an assertive news reporter but does run to tears when the going gets tough. Nina Rodriguez makes a great evil-mastermind's-moll in her sexy outfits, a la James Bond movies. The marriage-of-convenience ploy may have been necessary at the time, but is passé now. The story element of the I.D. bracelets works well.
The edition I have is a 1944 wartime oversize paperback titled 'Murder for Empire'. The cover proudly proclaims "A full length novel", yet the flyleaf states in tiny print "This edition respresents an abridgement of the original to speed the action."
Posted by Rick Mills at 1:19 PM No comments: 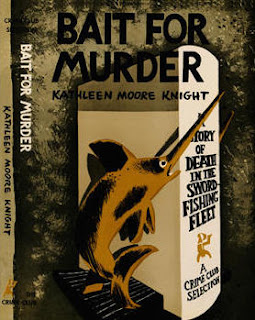 Commercial crew of The Rover:

Commercial crew of The Three Sisters:

Elisha Macomber
Locale: Penberthy Island, off Cape Cod, Massachusetts
Synopsis: Two pleasure swordfishing crews arrive on Penberthy Island. Guy Philbrick and the crew of Xiphias, from a publishing company; and the crew of The Cormorant, headed by Ives Berrien. Bad blood exists between them - Berrien has plagiarized and published work by Dick Eaton. Guy brings his wife, Andrea, along; but she prefers to remain on the island and work on her mystery story.
Berrien and crew quickly antagonize the commercial crew with their dishonest work. Twice they attempt to take swordfish which other crews are fishing. They collide with The Three Sisters, seriously injuring Olaf Magnusson. Berrien continues to make enemies among the locals, and as expected, turns up dead on his boat. The locals are surprised to find that Charlotte Quentin is married to him. Wealthy Alice Chilton shows up in her speedboat, she is after Berrien himself and is also quite annoyed to find him married. Alice looks like the prime suspect, but then she is killed as her speedboat runs up on the rocks.
Review: An excellent Knight, told from the unusual third-person aspect of a mystery writer, observer, and narrator Andrea Philbrick. The tensions between the pleasure fishermen and the locals is tangible and realistic. The same tensions exist here in Maine between locals and fishermen from away.
Berrien is a first rate cad and no one is sad to see him go. A couple more deaths pile up and may not be accidents.
The story takes a surprising Agatha Christie-style turn at the end when the murderer is revealed. The solution skirts with fair play a bit, as some aspects were not revealed to the reader as they occurred. The end is eye-opening, however, and the ultimate ending a bit sad.
Posted by Rick Mills at 8:55 AM No comments: 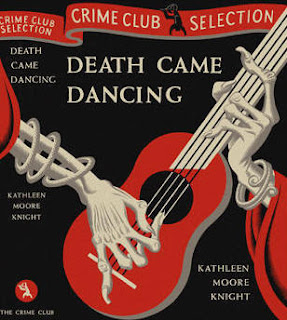 dustjackets.com
Major characters:
Locale: Panama City
Synopsis: Barbara Locke, our protagonist, has come to Panama seeking glamour and excitement. She takes a job at Tropical Tourist Agency, as an assistant to owner Tod Richmond. Tod's wife, Liane, is a predator and has her eyes and claws out toward various possibilities: Sidney Bonfield, British diplomat; and Mark Fleming.
Preparations are underway for a gala evening: the Pollera Ball. At a pre-gala cocktail gathering, Liane mentions she will be wearing her Tembleques, a priceless Panamanian gold hair ornament. The pairings for the ball indicate the dysfunction of the Richmond marriage: Tod is taking Barbara (instead of his wife), while Sidney Bonfield is taking Liane. After the ball, Barbara returns to her room to find Liane is dead and the Tembleques gone.
Elderly Julia Lear (Liane's aunt) is aghast, she is more upset that the tembleques are missing than her niece is dead. Later she receives a package with the tembleques in it, and is instructed to attend the carnival that night to find out who killed Liane. Julia wears the templeques to the carnival, and she is killed also; and the tembleques she is wearing are found to be a copy.
Elisha Macomber is still in Panama on vacation, and is urged to investigate.
Review: This novel is a sequel to The Tainted Token. While it is a standalone story, The Tainted Token sets up the locale and the background for why Elisha Macomber is in Panama, and his relationship with the authorities.
Knight has, again, set up the atmosphere of Panama well; and in a similar household setting as The Tainted Token. The characters all inhabit a common version of an apartment building, a hollow single-story square with a balcony around the outside and a common courtyard in the center.
There are two intertwined mysteries: the two killings, and the situation of the original and the copy of the tembleques. They turn out connected, and the solution revealed satisfactorily. The ending seems to me hastened, with the killer bowing out of the story suddenly, and the love story between Peter and Barbara coming to an ambiguous ending.
The two stories should be read together, in sequence, for the best experience.
Posted by Rick Mills at 7:25 AM No comments: 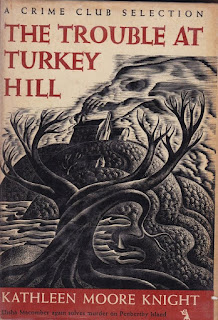 Harvey Winchester is the owner of Turkey Hill Farm and is looking forward to Tad’s return to his former job as farm manager. The other employees are Enoch Snow*, hired hand; and Mattie Mason, cook.

The boys are met at the dock by Tad’s wife Alyse March (who has never forgiven him for a previous affair with sultry Zaida Pinho), and Pershing’s girlfriend Candy Pierce (distant due to news of Pershing’s brief marriage overseas which ended with the wife’s death in childbirth).

A town dance is held in celebration that evening, but most of the attendees are busy shooting eye-daggers at each other. Miss Marion Thorne, who is always veiled, is injured by a thrown rock outside the dance.

The next morning librarian (and narrator) Marcella Tracy goes to Turkey Hill Farm to find Alyse dead from violence. While she and selectman Elisha Macomber investigate, another murder occurs at the farm.

Elisha Macomber is sharper-tongued than in other books, and here enlists a local as both narrator and co-investigator. Petty jealousies abound between members of the small island community, and what should have been a happy homecoming for the three servicemen falls apart quickly. I had to make a sketch of who-loves-who as there are several affairs happening simultaneously.

Elisha solves the case not by active investigation, but in his role as father-confessor for the town as various people reveal things to him. The final scene is exciting as two people struggle at the top of a cliff, alternately illuminated by the red and white beams from the lighthouse, a setting which reminded me of Sherlock Holmes and Professor Moriarty at their struggle on the cliff.

One nitpick: In the denouement, Elisha reveals several facts which had not been shared with the reader.

*sound familiar? This is also a character name from Rodgers and Hammerstein's Carousel, which was written in 1945.

Posted by Rick Mills at 8:55 AM No comments: