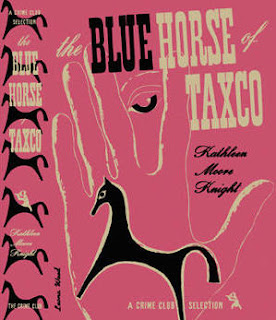 Troy Bannister heads to Mexico to select a jewelry maker for Frobisher Department Stores. She has organized a competition to select one to be their exclusive supplier in the US. She has a hidden agenda: she wants the winner to be old flame Jerome Blake, to get him back in her clutches and back to the US.

Upon arrival, two sinister things happen. First, she visits one of the jewelry makers, Casimir Lazlo - considered to be front runner in the competition. Minutes later, he is found stabbed to death and his prototype necklace missing. Second, she runs into old flame Jerome Blake, but he pretends to not recognize her, and is going under the alias of Joe Blank.

Soon after, Troy is leaving her room and comes across the body of Carmelo Ortiz, another jewelry designer. His son, Chucho Ortiz, tells how he saw her running away from the scene. All circumstantial evidence points to her.

Meanwhile, she finds that several residents jealously guard some small pieces of blue ceramic. They turn out to be legs broken off a ceramic horse, and they serve as a talisman for something important ... but what?

Troy Bannister starts out likable but soon is revealed to be a selfish, scheming woman who will stop at nothing to get her claws into her old flame, Jerome Blake - even going so far as creating a rigged competition and arranging for him to win for her own purposes. A very unusual casting of characters for a Knight novel, we are used to the falsely-accused woman protagonist as the heroine (much like the stories of Mignon Eberhart).

The descriptions of the Mexican village paint an amazing word picture and are worthy of standing alone as a travelogue, and remind me of the nonfiction writings of Erle Stanley Gardner.

The meaning of the blue ceramic horse legs is not revealed until the end, when the plot takes a surprising turn.